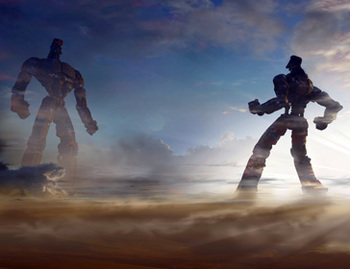 Ten years of stories has led to this moment.
"As much as people may tire of it, as much as some may want us to move on completely and stop talking about it, Bionicle is important to LEGO's history, to pop culture. That image of Tahu's mask, with the screaming maw and iconic scowl, is not going anywhere, and this video is far from the last word of the subject, not necessarily because we can't let it go, but because it never stopped giving."
—LEGO Rewind Finale: BIONICLE

Exactly how does a line of action figures owned by LEGO manage to last for 10 Years? By having Awesome Moments like these, that's how. Not only did it save Lego from bankruptcy, but so much more. They could’ve just made six or so buildable action figures and have a simple story of good and evil but no! Well written characters, incredible battles, ancient secrets around the corner, amazing creatures, great bad guys including the villain to end all villains, all in a multiverse of endless creative possibilities!

"The battle that followed was epic. Icarax was the better fighter, but Teridax was more cunning. He allowed Icarax to pound him for hours on end, until the rebel’s energies were almost exhausted. Then Teridax exerted the smallest amount of his will and turned the Manas against Icarax. Once he was surrounded, Teridax used every power at his command to defeat...no, demolish...no, perhaps humiliate would be a better word...Icarax."
"“Your talents are still of some use to me, and so I will not kill you... today,” the leader of the Brotherhood said. “But one day – perhaps in a year, or 1000 years, or 100,000 years – I may grow tired of you, Icarax. You may cease to be amusing, with your posturing and your boasting and your lust for battle. And on that day, your armor will be a meal for metal-eating scavengers, and your essence a wisp on the wind.”

2010 and beyond: Journey's End / Sphereus Magna