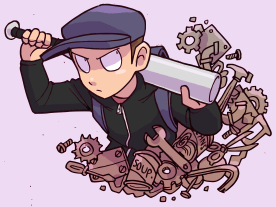 "Ohhh don't you dare! Do NOT play the skeptical slasher movie cop! I am in clear and future danger!"

Our protagonist. On his first day of school after moving into Mayview, his sixth sense awakens and he is quickly swept up into the additional level of wackiness (compounded with the entire town's oddballness) that is the Paranatural Activity Club. He is extremely acrobatic and uses a baseball bat with powers of magnetism as his tool. 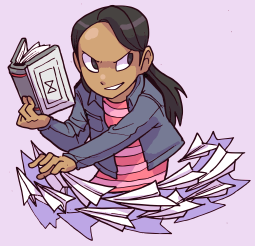 An energetic classmate of Max's. She absolutely loves her work with the Activity Club, to the point of probable bloodthirst. Her tool is a thick book full of blank pages that she can manipulate. She is also best friends with Ed. 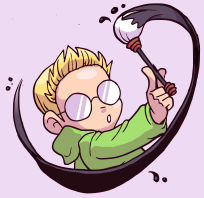 "Just FYI, ya prob'ly shouldn't walk through there fully exposed. With no shield, I mean. Well, without clothes either."

An especially energetic and somewhat off-kilter member of the Activity Club. His tool is a paintbrush, allowing him to paint weapons on any surface, even thin air. He is also best friends with Isabel. 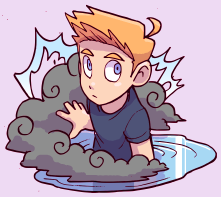 "I will dance on your grave, sir."

By far the most normal member of the Activity Club. Knowledgeable about the paranatural, but is treated as a Butt-Monkey by the rest of the club. He is a "medium", a possessed human able to use a spirit's powers without a tool as a conduit. His powers are weather-based, giving Isaac the ability to wield lightning, rain, clouds, wind, and snow. He also claims to be able to take on Isabel and Ed at once. 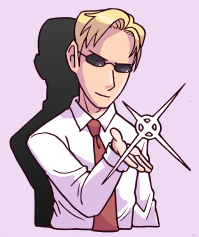 Max's history teacher, and the advisor to the Activity Club. Cultivates a certain air of mystery which simply annoys the club's Genre Savvy population. His tool is the sunglasses he constantly wears, which give him the power to manipulate light. 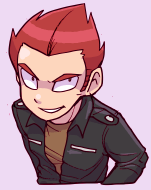 A friendly bully who Max fights on his first day in Mayview.

"What genre of story did we just walk into? Oh my god. Are we even important characters?"

The biggest and strongest member of Johnny's gang, he's also far more calm and collected than his boss.

A minor member of Johnny's gang.

"Do you think they were all Wonder Women? Invisible... invisible jets..."

A hoodie-wearing member of Johnny's gang. Has a hidden, sparkling mohawk.

"Oh, hush. We're not getting paid to tell the truth."

Student at Mayview Middle School and president of the (unofficial) Journalism Club. Rather bubbly, but constantly ignores school rules and doesn't really care. Hates the Activity Club because her attempt to make a report on all the clubs went incomplete because they refused to be interviewed.

"Is this going to end with you blowing up his house?"

Student at Mayview Middle School and member of the (unofficial) Journalism Club. He has a low tolerance for his boss's actions. 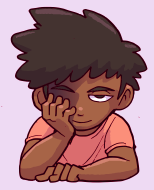 "This is going to end with her blowing up his house."

Student at Mayview Middle School and member of the (unofficial) Journalism Club. Too laid-back for life, Dimitri mostly appears in the background either sleeping or doing nothing in particular. 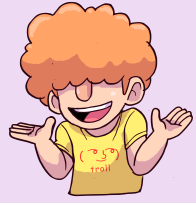 A student at Mayview Middle School. Rather excitable and friendly. Also a big nerd.

One of Max's classmates at Mayview Middle School. Seemingly one of the few kids around who doesn't have some odd trait, other than an excessive tolerance for weirdness.

Student at Mayview Middle School. She's considerably more mature than the rest of her friends and tends to make smart remarks if they do something she considers stupid. Best friends with Lisa. 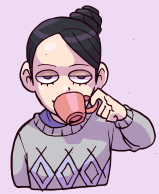 "Incidentally, how much is your house worth?"

Student at Mayview Middle School. She's rather... eccentric, and has a large vocabulary that she attributes to Mr. Starchman's teaching. Knows all the goings-on at school. Best friends with Violet.

A classmate of Max. She claims to know about the Activity Club. 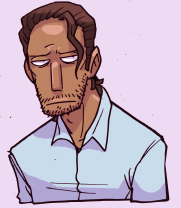 Max's English teacher. He's... enthusiastic about teaching. Gives out Starchman Stars which can be redeemed for prizes.

"Is there... something you want to talk about? I mean, not with me, but, like, with someone who'd want to talk to you."

The principal of Mayview Middle School, she is a small African-American woman who is constantly bowled over by the Vice Principal.

The vice principal of Mayview Middle School, and the power behind the throne. She swears to punish the person who jumped through a moving bus (Max) before his "virus" can "infect" the rest of the student body. 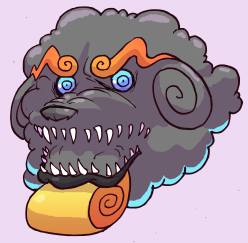 "It is easy to preach nonviolence... WHEN YOU ARE WEEEEAK!"

Isaac's bound spirit, who resembles (and claims to be) a storm god. His spirit realm is an ancient, ruined temple caught in a perpetual rainstorm. He and Isaac aren't on the best of terms.

"Ah, it feels good to stretch my legs again. ALL EIGHT OF THEM! GYEHEHEHEH!"

Isabel's spirit. Takes the form of a (quite cute) origami spider with a cootie-catcher for a head who usually resides inside Isabel's tool, a thick book. Her spirit realm is a musty, cluttered library filled with all of the books she's consumed. According to the author, she is "objectively the cutest thing in the comic." 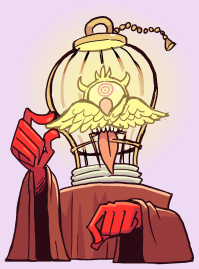 "If you hand your heart your moral compass, it will lead you astray."

The spirit in Mr. Spender's sunglasses.

The spirit sealed inside Max's bat. An enormous serpent, its spirit realm is an endless junkyard where the sun is always setting.

"Let's beat up one million children."

Ed's spirit, bound to his paintbrush. A tall, muscled monkey-like creature with hair and a tail resembling Ed's paintbrush. His spirit realm is a vibrant cartoon world where everything but him and Ed are rendered with amateurish ink drawings.

A spirit possessing Max. So far has only appeared to intimidate the Doorman, but seems to be part of the strange going-ons in Mayview.

Hijack: W-w-what is that!?
Lucifer: A nuclear bomb. "Some freaky shadow spirit." Worthless scrap. Who knows.

A spirit possessing Mr. Spender. Lucifer and Spender actively work to contain it, as it is apparently some sort of dangerous shadow spirit.

"you are hiding under a table from a blind woman"

A cocoon-like spirit with one eye that peeks through. Bound to Mina Zarei. Speaks in lowercase, rainbow-colored type over black speech bubbles. Her spirit realm is a dark forest.

"Thou hast thy proof."

Day's spirit, a plant spirit with a Venus flytrap mouth and thorned, flowering vines. Uses statue pieces to emote. His spirit realm is a Greek-styled ruin covered in rosebushes and thorned vines.

"It's true, my abilities are nothing next to those of my sworn brothers. And all three of us pale in comparison to our wise and wonderful teacher."

Isabel's new spirit inhabiting the umbrella her grandfather gave her. He is a turtle with a cardboard box for a shell and a turtle-shell hat. He can "flip" the position of things. His spirit realm is a subway station.

A Bedsheet Ghost with the mind of a child. Their medium seems unwilling to use their powers. Their spirit realm is a child's playroom full of discarded toys.

Ghosts, Free Spirits, and other entities

"Just exercising my face muscles in case I ever feel happy again."

A poltergeist. Hangs around P.J and is his right (or left, apparently) hand man.

A small, but vicious spirit that takes the form of a feral-looking bat. It lives at Mayview Middle School, feeding on the ghost population, and regularly gets into scrapes with the Activity Club.

A spirit who intrudes on Max's home in Chapter 2. Looks something like a cross between a whale, a frog, and an angry bodybuilder. His name was revealed on Zack's Twitter.

The Sphinx of Games

"YOU ARE SO BAD AT RIDDLES!"

A sphinx spirit who guards a plank bridge in an alleyway. 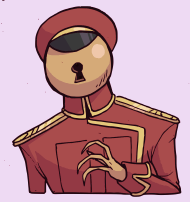 "I am always willing to assist... a true agent of justice."

A friendly spirit and mentor/friend of Isaac who is currently hiding out on the outskirts of town. Has some kind of history with Max's spirit and Forge. 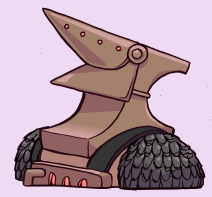 "We burn the present for the sake of a better future and are surprised when all it holds is ash!"

A humanoid poltergeist who resembles a medieval blacksmith with an anvil for a head and an oven for a chest.

A large train spirit that resembles a snake made of metal. Described as a formidable spirit, but was tamed by Doctor Zarei.

"I make my own darkness."

A bunny-like spirit and associate of Doorman. Has the power to multiply herself.

"My dear friends... to hear your voices after so long... it is a gift beyond measure."

Little is known about this being, who Doorman and Nin report to. Forge seeks to aid her.

"Y'know, I'm usually pretty good at my job. Sneaking in, sneaking out. Silent infiltration. Turns out I'm in a really bad mood today, though. So today I'm playing the vengeful spirit."

A spirit who is trying to infiltrate the teacher's lounge at Mayview Middle School. 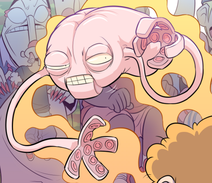 The Sphinx of Truth 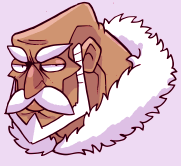 "You missed the target's center by nearly nine centimeters. You call that a spectral energy compression projectile burstshot?"

Isabel's grandfather. He owns a dojo that trains spectrals on how to use their powers. Incredibly strict, and very harsh. 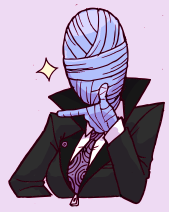 "You know how much I enjoy appearing unexpectedly."

The apparent leader of the Activity Consortium. A magnificent troll. 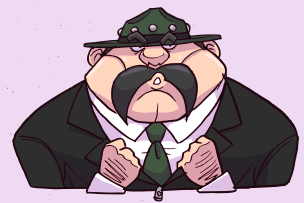 However, he follows this up by explaining that since his room is a manifestation of his subconscious, it's only natural that things should come out as easily as they get in, so it's not clear if he also meant it in a "being bi" way or if he's just oblivious to the innuendo.

A Consortium scientist who tamed the Ghost Train. Along with Spender, she was once a student of Francisco's dojo. 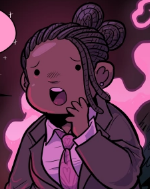 An agent the Consortium sent to investigate activities in Mayview. Not exactly the most violent woman in the comic.

"My friends call me Davy."

A local business owner. A spectral, "for all intents and purposes." 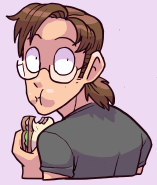 Max and Zoey's father and owner of the Corner Store, the convenience store that doubles as the Puckett's home. A native to Mayview, who came back after his wife passed away.

The youngest child. Has a higher tolerance to her father's antics than Max.

Max's mother, who died shortly before the series began. Appears in a flashback

in the Ghost Train chapter.

A wealthy delinquent Stephen encounters on his day away from school.

A rich local who lost her dog.

Initially appearing to be an ordinary waitress, she is revealed to be a relative of Mr. Spender at the end of chapter 6.