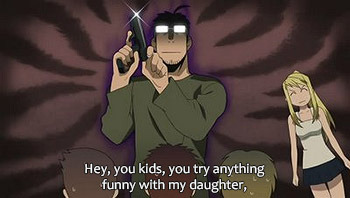 You know this guy. You might even be this guy if you're a father. Well aware of the sex-obsessed horndogs that teenage guys can be—probably because he used to be one—the Overprotective Dad wants to protect his daughter from being exploited. Unfortunately, he tends to take it all too far, holding the Eight Simple Rules For Dating My Teenaged Daughter as his personal bible.

It's not just a matter of a father/daughter variation on My Girl Is Not a Slut; it's that he doesn't trust guys around her, and he's probably also displacing some angst about "losing" his little girl. Unfortunately for the poor young man who eventually attracts her interest, the Overprotective Dad isn't going to be inclined to give him an inch—he will receive No Sympathy for any chaos that results from their courtship, and even the slightest or most obvious misunderstanding or misconception about the man will have the Overprotective Dad warning him to "stay away from her!"

On some occasions, it's obvious to everyone that the Overprotective Dad is merely using that as a (fairly weak) excuse to keep the suitor away from his baby girl. In the rare event that he finds a suitor he can tolerate, he will still threaten the boy with dire consequences If You Ever Do Anything to Hurt Her.... Oddly, we never seem to hear from the boys' parents, who, one assumes, might object to their sons being threatened with violence.

This trope is especially common in stereotypes of the Deep South, where every sweet Georgia Peach has a very large (usually fat, hairy, and drunk) father in a white tank top that usually keeps a rifle or shotgun with him at all times.

If Adults Are Useless, then he'll probably just be comic relief as he huffs and puffs ineffectually. Otherwise, he may serve as a Parent ex Machina to deliver the message that you Can't Get Away with Nuthin' and ground his daughter at some point. Somewhere between those two is the Overprotective Dad who ends up enforcing a Shotgun Wedding after the condom breaks.

In a worst-case scenario, if the daughter dies while giving birth to her boyfriend or husband’s child, her father may blame the unfortunate widower for her death. The new widower may or may not agree with him.

Depending on how this is played and how much you want to dissect it, this trope can carry all of the same problems as My Girl Is Not a Slut and may imply that the woman in question is less an agent of her own destiny than her male relatives or, worse yet, that she's somehow their property. The concept can also easily become even Squickier with a Pervert Dad. Ironically, if the father has a son, he may applaud or encourage him if he treats girls in the exact way he doesn't want other guys to treat his own daughter.

Gender Flips are less common, i.e. fathers more concerned about the girls/women their sons date. This is due to several double standards, such as Men Are Tough, All Men Are Perverts, and A Man Is Always Eager. Cougars are usually jokes instead of threats; men are subjected to pedo hunts. Overprotective moms are also very rare, typically not being all that concerned with who their kid of either sex dates. At worst they'll be My Beloved Smother, who's more likely to nag and nitpick the significant other, usually a woman, to death for not being good enough for her son/kid which isn't the same as threatening to kill somebody for talking to your daughter. They're also just as, if not more likely, to wait until after the wedding before they start antagonizing their child's significant other.

This character may or may not think he's being a Papa Wolf, but this is a different trope. If it belongs in the latter then don't put it here. The same person can be both at different times but those times are different. However, this trope might overlap with Knight Templar Parent if the dad goes to dangerous extremes in their overprotectiveness.

Dr. Doofenshmirtz banishes a biker to another dimension when they try hitting on his daughter.

Dr. Doofenshmirtz banishes a biker to another dimension when they try hitting on his daughter.