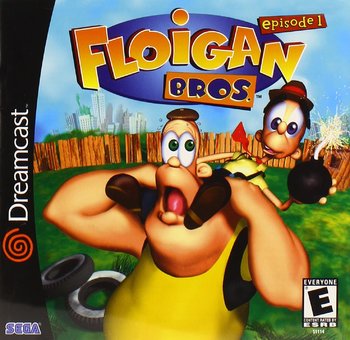 The evil Baron Malodorous is planning to steal the land occupied by the Floigan Bros. junkyard for himself. It's up to the small and resourceful Hoigle Floigan (Jason Marsden), and his big and loveable brother Moigle (Frank Welker), to defend their property from Malodorous and his gang of Mercenary Kittens. Moigle is developing a mysterious secret machine that might help them in this purpose, but requires some pieces scattered around the junkyard. Together, the brothers must traverse the area and recover the necessary parts.

The game can in many ways be considered a love letter to Golden Age cartoon shorts and classically mismatched comedy pairs such as Laurel and Hardy. Expect liberal amounts of Slapstick and Cartoon Physics. The game's humor and visuals, which notably avoid the use of Cel Shading, were a point of praise for many critics.

Another point of interest is Moigle's AI. The player only directly controls Hoigle, who can interact in several ways with his brother. He can play games with him, bring him food, hug him... or insult him and punch him to make him sad and angry respectively. In fact, toying with poor Moigle's emotions is more often than not necessary to solve puzzles and progress in the game. Depending on how you've treated him along the game, one player's Moigle can end up being significantly different from another's. Indeed, back when the game's servers were online, players used to have an option to trade Moigles.

It is also notable for being one of the first games to include Downloadable Content, in the form of FMTs (Fun Moigle Things). That is, for each month of the year, a new downloadable gizmo or mechanic with which to customize Moigle would be released for download. Due to the game's unfortunate release date, it is believed not all of these were initially released in the first place. However, as they were on-disk DLC, an enterprising group of gamers, with help from the game's developers, unlocked them all in 2017

, 16 years after the game's original release.

As the title indicates, this was not intended to be the Floigans' only outing. Early in the Dreamcast's lifespan, a cloud of hype surrounded the game, being billed as "revolutionary". Bernie Stolar, then-president of Sega of America, went as far as saying that Floigan Bros. would "do for SEGA what Mario did for Nintendo". An entire franchise, containing many more episodes, was planned. Alas, it was not to be. The game was stuck in Development Hell for a couple of years, and together with the Dreamcast's short lifespan, it meant it only got released for a bargain price after the console's discontinuation, when interest had mostly waned.