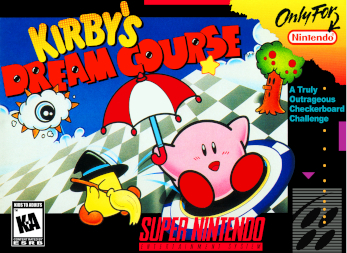 Kirby's Dream Course is a golf spinoff of the Kirby series developed by HAL Laboratory and released on the Super Nintendo Entertainment System in 1994.
Advertisement:

The game is a miniature golf game set in an Isometric Perspective. In each world, the player must move Kirby through 8 holes by setting the angle, power, and speed at which he will fly. After Kirby flies around the course and defeats all but one enemy, that last enemy transforms into the hole. Defeating certain enemies can also give Kirby special abilities that he can use to move around the course faster and with fewer strokes.