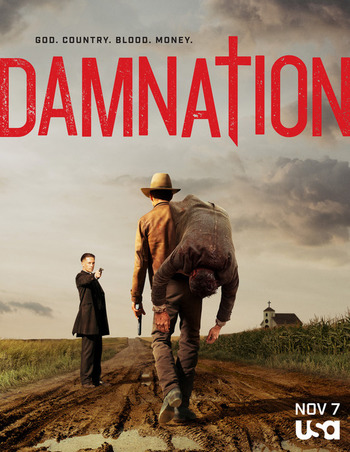 Damnation is a series that aired on USA Network in 2017, and starred Killian Scott, Logan Marshall-Green, and Christopher Heyerdahl.

In 1931 the labor unions are amassing power and business owners are getting fed up, particularly in Iowa, where Rev. Seth Davenport is stirring up a farming strike. In a bid to restore control, local tycoon Calvin Rumple employs Pinkerton operative Creeley Turner to put down Davenport's rebellion. Unbeknownst to him, Turner is Davenport's brother.

This series was ultimately cancelled after just one season.

Unrelated to the 2009 video game of the same name.