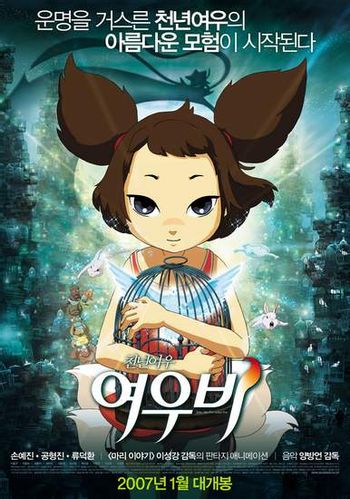 Yobi, the Five-Tailed Fox is an animated film from Lee Seong-gang, the director of My Beautiful Girl Mari. And animated by Korean studio Sunwoo Entertainment.

One hundred years ago, aliens landed on a mountain near the home of a small, white five-tailed fox. After being stranded on Earth for 100 years, they are ready for a test flight to see if they can return home. The test fails as one of the aliens makes a mistake, and the other aliens tell him to leave.

The runaway alien is taken in by a class of students at the foot of the mountain. There, a teacher named Kang trains students who don't fit in at a regular school. To save the alien, the five-tailed fox takes on the form of a human girl, and joins the school under the name of Yobi.

Staying at the school, Yobi becomes friends with one of the students, a boy named Geum-ie. She enjoys her time with the humans, until a fox hunter appears, as well as a shadow who gives Yobi a device which will allow her to become human by taking the soul from a human.