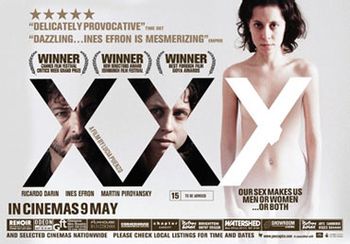 A Spanish language film about Alex, an intersex teenager, coming to terms with her sexuality and existence and the effect it has on her family. Female pronouns are used in this entry for Alex as the movie consistently uses female pronouns and adjectives (in Spanish, adjectives have gender).

This movie was inspired for "Cinismo" by Sergio Bizzio, but the movie shows much more adaptational LGBT empathy, when the original tale is mainly played for laughs denoted by a narrator who make fun of the protagonist.

Alex and her family live in an isolated island community in Uruguay and Alex lives a girl, her true nature a secret. While her family has raised her a girl, Alex is ambiguous about her gender and if anything seems to want to live as a boy. It's enough that she has secretly stopped taking her estrogen pills. Alex's mother invites a surgeon friend and his family to visit. Neither Alex nor her more supportive father know that he is visiting to discuss the possibilities of a sex-change operation. Alex and the surgeon's teenage son Álvaro form a bond and have anal sex, with Alex on top. Alex's father witnesses this and is forced to confront his daughter's sexuality.

When boys from the village assault Alex in order to see her genitalia, it becomes Alex's decision whether to press charges. If she does, everyone will find out who (and what) she is.

The subplot of the movie involves Alex's new friend Álvaro, who also seems to be struggling with his sexuality, especially after discovering that he loved being penetrated during sex.