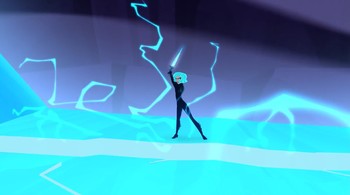 She abandons her friends... 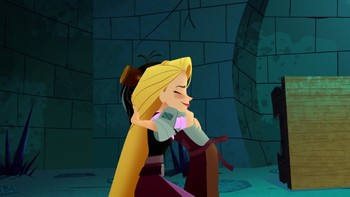 ...but he manages to redeem himself.
Advertisement:

After Cassandra merges herself with the Moonstone, she reveals to Rapunzel and Eugene that, when she entered the House of Yesterday's Tomorrow, a mysterious spirit showed her a memory of her being abandoned by her mother at the age of four before being adopted by the Captain of the Guard. This mother is none other than Mother Gothel, and Cassandra now blames Rapunzel for being cast aside in favor of her. Rapunzel attempts to appeal to Cassandra, trying to convince her that her being Gothel's daughter makes them sisters and that they can work this out together, but Cassandra rejects her and flees.

Once Rapunzel and her group return to Corona, they discover the kingdom has been overtaken by the Separatists of Saporia, led by Andrew, with the aid of their old friend Varian. In spite of this, it is soon revealed that Varian only helped the Saporians because he wanted to have a fresh start, and erased the kingdom's memories of his misdeeds. However, when the Saporians reveal they intend to destroy the people of Corona, Varian turns against them and sides with Rapunzel. Following the Saporians' defeat, Rapunzel uses the Decay Incantation to free Quirin from the amber, and Varian reconciles with the both of them.