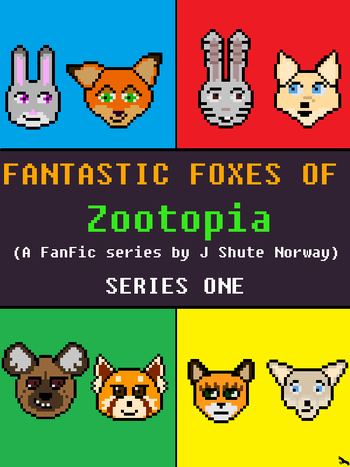 Fantastic Foxes of Zootopia is a multi-instalment, multi-fandom fanfiction by J Shute.

While predominantly a Zootopia fanfiction, Fantastic Foxes of Zootopia also prominently features characters from Fantastic Mr. Fox and Aggretsuko, and has incidental appearances from numerous other Funny Animal intellectual properties.

Fantastic Foxes of Zootopia comprises multiple serial-style works, some longer than others, with many of them featuring different protagonists. It can be found as a series on Archive Of Our Own

and on J Shute's page on FanFiction.net

. The Archive Of Our Own version splits the "Series" works up into multiple stories within the same series, while on FanFiction.net, all the stories apart from "Different" are combined into one story,

Tropes across the series at large
Tropes in "Different"