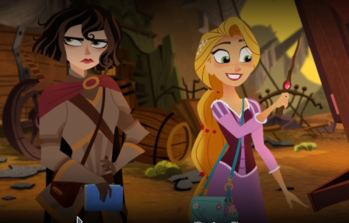 Ooooh, a memory wand; I wonder what it does!
Advertisement:

Things are awkward between Rapunzel and Cassandra. They go off to search for parts for their destroyed caravan and come across an abandoned magic stall containing a wand of forgetting. Cassandra impulsively wishes Rapunzel would "just forget about everything" when she is tired of her trying to patch things up between them, which results in Rapunzel regressing to when she was still in her tower.