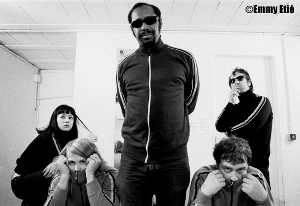 Detroit Garage Rock band blending genres like Punk Rock, Soul and Rock & Roll. Leader Mick Collins is a Furry, and this is a source of inspiration for many of the band's lyrics. He's also a friend of and something of a mentor to Jack White, since Collins led his earlier band the Gorys.