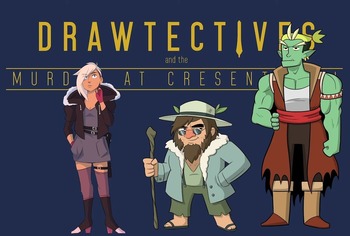 They're not the best in the business, but they do what they can.note  From left to right: Rosé, Grendan, and York.
Advertisement:

Drawtectives is an Urban Fantasy whodunnit RPG campaign created for Drawfee by Julia Lepetit, who also serves as the DM.

The show was put on hold after the 2020 CollegeHumor shutdown, which left the future of the series up in the air. However, after Drawfee reestablished itself as an independent production, the show has officially been Uncancelled, with new episodes premiering on the channel.

Season One — dubbed Murder on Crescent Hill — has our heroes trying to uncover the truth about the murder of Paladin Captain Sorin Justice, which was committed during a social gathering at the expansive Crescent Hill mansion. Following the end of this arc, a second season - titled The Celestial Spear - was announced and released it's first episode on October 5th.

On August 23rd a special one-shot was live-streamed where the gang reunite to solve the dissapearance of Harper's dog* That she stole.