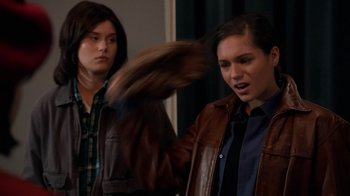 A teacher in Flint, Michigan disappears while acting as faculty adviser to a play. Dean thinks this is their new case, although Sam doesn't see any supernatural connection. Both are surprised when they get to Flint and learn there's a Supernatural connection: the play is based on Carver Edlund's books, and hence on their own lives. And the muse Calliope has taken an interest.

For this episode: 1 god.