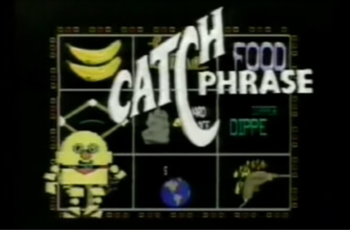 Where what you see is what you guess.
Game Show from the mid-1980s in which two contestants competed to solve animated picture puzzles drawn by a computer. Some of the puzzles featured a yellow robot, named Herbie in America and Mr. Chips in the United Kingdom.
Advertisement:

Art James was the host of the syndicated American show in 1985-86, and the much more successful British version on ITV had three hosts — Roy Walker (1986–99), Nick Weir (2000-01), and Mark Curry (2002). At its prime, the ITV version was one of the most popular games on British television and one of the cornerstones of Saturday night television. Part of this popularity was the presence of Roy Walker as host, so much so that when he left, the show quickly went downhill and was axed a few years after. A revival of the British version started in 2013 with Stephen Mulhern hosting. The format has also been exported to Australia, Greece, Indonesia, Poland and Vietnam. The Greek and Polish versions had female hosts in 2000: Joyce Evidi and Agenieszka Wróblewska, respectively. Original producer Marty Pasetta tried three times to revive the show in the US (twice in the 80s, once in 2006), but none of the attempts gained traction.

The appeal can be broken down into two parts: