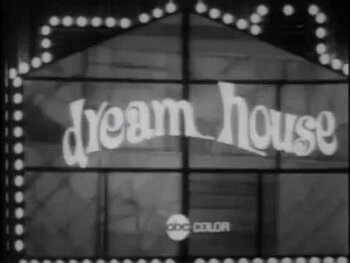 Game Show created by Don Reid in which two couples competed to win a new house by answering questions. The first version aired on ABC from 1968-70 (with a concurrent nighttime run for six months in 1968) and was hosted by Mike Darrow.

Two couples competed in a game of quick recall. The first player to buzz-in got to answer first, with a correct answer scoring five points; tf s/he was wrong, the other couple could try to answer for 10 points. If a player gave a correct answer, s/he was locked out of the next question.

Two minutes before the end of the game, which lasted from 4-5 minutes, the point values doubled, and at the end was the "Catch-Up Round" in which the trailing couple chose one last question from 10-50 points (if they answered correctly, the other couple got one last shot). The winning couple won a room of furniture, and any couple that won seven games (four on the nighttime show) received a new $40,000+ house plus $7,000 to purchase land.

The show gave away over a dozen houses in its first year on the air, but in mid-1969, TV Guide reported that none of said houses had been completed and some couples had to borrow much more than the $7,000 given to them. After this came to light, the format was overhauled.

Three couples competed in Round 1, and all players were allowed to buzz in on every question. The points were doubled during the last two minutes of the round, and the two leading couples played Round 2 (done just like the original format). Five-time champions were offered an airplane as an incentive to quit, while those who went to seven could choose between the house or $20,000 cash as their grand prize. The changes didn't work, as Dream House ended on January 2, 1970 and was replaced by All My Children.

The revival aired on NBC from 1983-84, hosted by Bob Eubanks. As before, two teams of two (usually married couples) competed; Eubanks read a true-false toss-up question, and a correct answer awarded $50 and control of a question board of four categories. Each category had a multiple-choice question and, after the couple gave their answer, the opposing team could challenge and give their own answer (but only two challenges were allowed per couple). Right answers won $100, plus $50 for an unsuccessful challenge.

The game was played in two rounds, and the leading couple after Round 1 won a prize. Round 2 was the same, except each team had a one-time opportunity to double the value of the question after Eubanks asked it, but before he had read the answer options. The leading couple after Round 2 won the game, received a room of furniture, and advanced to the bonus round (although both couples kept any money and prizes earned).

The winning couple faced the Golden Doors and attempted to enter its three-digit combination. The couple began with 12 digits (three rows of four), but could remove one digit from each row by answering up to three questions; a digit was also removed from each row for each day they returned as champs. (Originally, they got one digit off the lock for every win, including the first.) Entering the correct combination, or winning a certain number of games (see below), won a house worth about $100,000.

In early 1984, the rules changed: the couple in control had to hit a plunger to determine the questions' value via the Money Machine, a light that stopped on $50, $100, $150, Prize, Turnover (gave control to the other team) or Number Off (a correct answer eliminated a digit in the Bonus Round if that couple won; second round only). Winning by a margin of $500–$950 awarded a prize (later reduced to $500), and a victory margin of $1,000 or more awarded a new car.

This version ended in June 1984, replaced the following Monday by Scrabble.