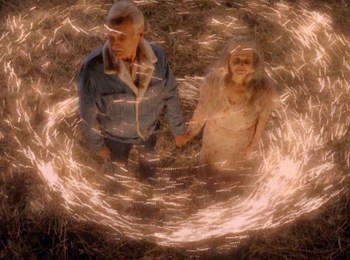 Gerry and Helen "going into the light".

The Control Voice: It is said that through our children we obtain a kind of immortality. An unending chain of life in which mother and child are forever linked, carrying in turn the burden of humanity.

A doctor and a sheriff investigate when women from a retirement home go missing and young women grow old and die.

The Control Voice: The love of man and woman, the love of a mother and child. It is only from these places...that miracles can be born.

"I'm going into the tropes":