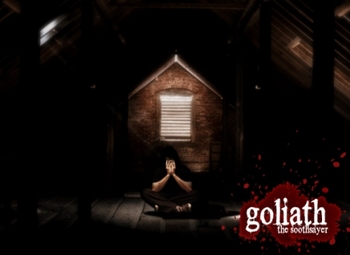 Goliath the Soothsayer is a 2008 flash game from Ben Leffler of Exmortis fame, loosely based on a true story from The Mars Volta.

When a man’s brother disappears without a trace, he is appointed to attend to his estate. Then he wakes up in the attic. And things just get weirder from there, when he faces the malevolent forces haunting the house.