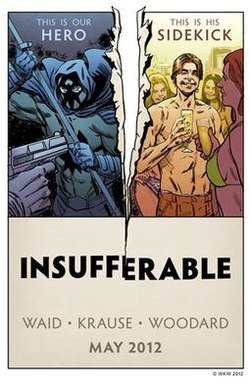 Insufferable is a hero comic written by Mark Waid, drawn by Peter Kraus, colored by Nolan Woodward. It is currently running on Thrillbent

. It is a comic that follows the adventure of Nocturnus and his annoying and extremely rich sidekick Galahad. The tagline of it is:"What happens when you’re a crimefighter and your sidekick grows up to be an arrogant, ungrateful douchebag?".