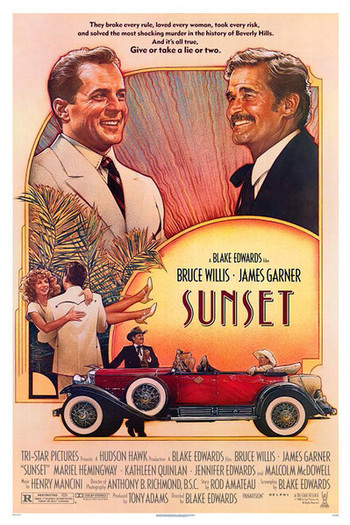 "They broke every rule, loved every woman, took every risk and solved the most shocking murder in the history of Beverly Hills. And it's all true. Give or take a lie or two."
Advertisement:

Sunset is a 1988 comedic mystery thriller written and directed by Blake Edwards, starring Bruce Willis as legendary Western movie actor Tom Mix and James Garner as legendary lawman Wyatt Earp (a role he'd previously played in John Sturges' 1967 film Hour of the Gun). The story is based on an unpublished novel by Rod Amateau, which was loosely based on fact as Earp actually did serve as technical adviser for some early silent Westerns.

The film is set in the Hollywood of the late 1920s, during the waning days of the industry's transition to sound film. Producer and studio head Alfie Alperin (Malcolm McDowell) wants to produce a great Western movie about Wyatt Earp. Tom Mix is cast as the great United States Marshal and the real Earp is on set as a technical adviser. But before the pair can start their movie adventure they are caught in a real case of murder, prostitution and corruption. Together they try to straighten out the problems of the missing son of Earp's former girlfriend Christina (Patricia Hodge). But now she is Alfie's wife—and he isn't amused by Earp's investigations. The fact that the young man's older sister is dating a notorious mobster and that all three were at the scene of a murder doesn't help. Soon Earp unveils the true sadistic character of Alfie, and after the death of Christina matters become personal.