Film / The Story of the Weeping Camel 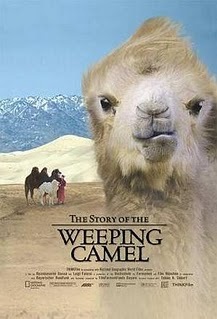 The Story of the Weeping Camel (Ингэн нулимс, "Ingen Nulems", Tears of the Camel) is a 2003 international co-production between Germany and Mongolia. It was co-directed by Byambasuren Davaa and Luigi Falorni.

An extended family of nomadic shepherds lives in the waste of Mongolia's Gobi Desert. Besides the sheep, their other material asset is their herd of camels, which they use as transportation and beasts of burden. The season comes for the female camels to deliver their young. The last female delivers a calf who is startlingly white-colored. Whether it be the strange color of her baby, or the exceptionally difficult delivery — apparently, it took two days for the calf to be born — the mother shows no affection to her young, and, most importantly, will not let it nurse. This is a problem, because without mother's milk, the baby will starve to death, and the loss of a camel would be a severe dent to the family's assets.

Meanwhile, while the family has to figure out how to deal with this crisis, they still have to deal with all the challenges of nomadic life in Central Asia, like sandstorms, bathing in buckets, and herding a flock of sheep.