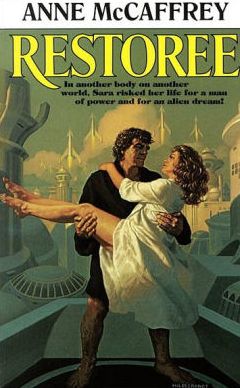 Restoree is an early novel by Anne McCaffrey. The protagonist is a young woman, Sara, whose unremarkable and not very happy life is interrupted by a nightmarish Alien kidnapping that sends her into an amnesiac fugue state. She gradually comes back to herself to find she has been physically transformed into a much more lovely form and is being employed as caretaker to an attractively ugly man apparently suffering from some kind mental illness.
Advertisement:

A bewildered Sara realizes she is on an entirely different planet and that the man she is tending is being deliberately drugged. She withholds the drugged food and he comes back to his senses revealing himself to be the Lord Harlan formerly regent of Lothar, the world they are on, and a victim of vicious political intrigue. According to Harlan Sara herself must be a survivor of a raid by the Mil, a race of 'cellular giants' who regard humans as food.

Together they escape and set out to save Lothar from political enemies and all the human worlds from the Mil.