Here is the page detailing the specific characters that inhabit the world of Blue Dragon. Tropes relating to the anime are also mixed in. Be wary of spoilers.

Tropes Applying to All Shadow Users 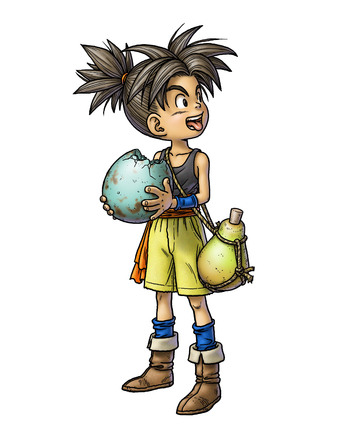 Main character of the first two games. He's a plucky boy who never gives up, even when all hope seems lost. Like a typical shonen protagonist, he's kind of on the dumb side, especially compared to Jiro, but Shu's sheer drive and determination make him a good leader.

In the anime, Shu has a strong desire to be a Knightmaster, the strongest of knights, as well as a hero. He gains his Dragon Shadow after seeing his hometown be razed by Nene's army. He's even more brash in the anime and has become a bit of a pervert as well. 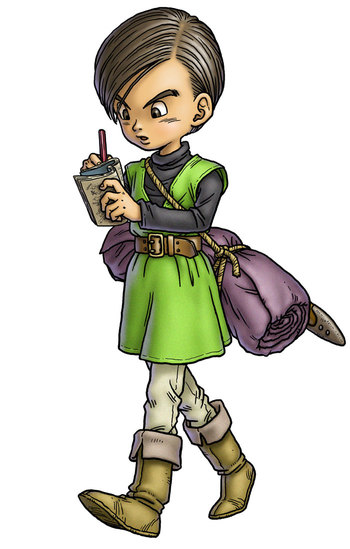 A studious childhood friend of Shu and Kluke. He's often the first to figure out plans, details, and nuances that the others may miss. His also very handy with machinery. He has affections for Kluke, but thanks to his shyness, he has trouble saying that to her.

In the anime, Jiro is an apprentice of Zola's and travels with her. He meets Shu in the first episode and the two get along like fire and ice, neither one liking the other. Jiro believes Shu is an uncultured buffoon, but Shu's desire to be strong mirrors his own, causing the two to become rivals. Overall, Jiro probably has the most differences between his video game and anime counterpart. 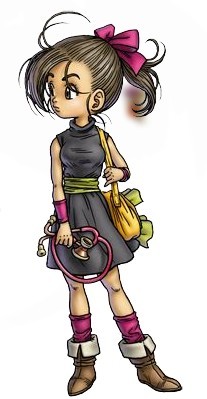 A young girl who lost her parents during one of the Land Shark attacks on Talta Village. She still grieves over their deaths in private. Another childhood friend of Shu and Jiro, Kluke desires to be a doctor thanks to the impact her parents had on her before they died.

In the anime, Kluke is the only childhood friend of Shu's that's basically the same as she was in the games, although she gets her Shadow later than the others and it's played up as a Barrier Warrior rather than as a Black Mage. She also seems to be somewhat of a mechanic, creating the gun and scooter she used in the first episode. 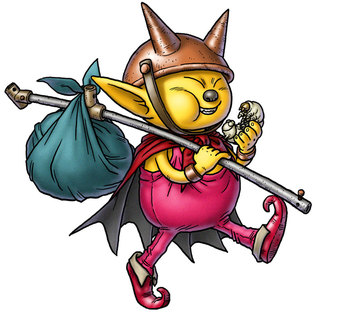 A member of the dance-happy folk of the Devee Tribe. He leaves his village to find medicine to help the Tribe recover from a terrible illness, encountering Shu and company along the way. Once the village is saved, he tags along with the trio in order to repay them. Has a tendency to always shout and is madly in love with Zola.

In the anime, he's far more perverted than he ever was in the games, but is generally unchanged otherwise. 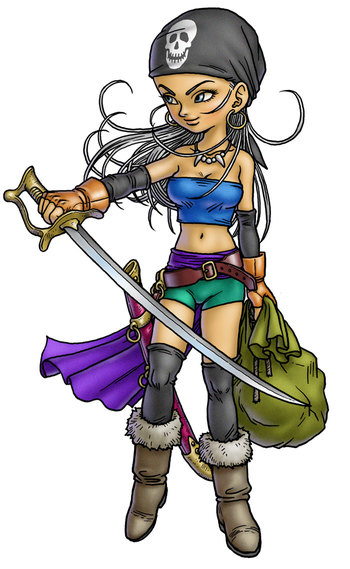 A powerful mercenary under the employ of King Jibral. Even without her Shadow, she's plenty capable of badass feats, just ask Marumaro, who's positively smitten with her. Compared to the kids, she's much more reserved.

In the anime, Zola is looking for descendants of a powerful group of legendary heroes. She has Jiro as an apprentice until Shu and company come into the picture. Like Jiro, Zola seems to have had the most changes in character between the games and the anime.

A ditzy barmaid exclusive to the anime. Shu and company meet her at the restaurant she works at and help fend off some unruly customers that were bothering her. She later joins the gang in their quest, partially because she lost her waitressing job, but mostly because she fancies Shu.

She's a member of the lost Ra Clan, which somehow means that she can turn invisible, at the cost of being nude in order to do so. Her Shadow is the Hippopotamus, one of the few that lacks significant combat ability.

The main character of Blue Dragon: Awakened Shadow. After waking up from a sort of stasis-induced sleep, the character finds a world where Shadows can come to life, but the people have had their Shadows stolen by a mysterious light. The player character, who managed to keep their Shadow, befriends Shu and company in order to figure out the source of the strange light and the mystery of who the protagonist is.

Unlike in the previous game (Blue Dragon Plus), which gave everyone their own unique Shadow, the PC doesn't have one specific Shadow to call their own. Instead, they start with the Dragon, Minotaur, and Phoenix Shadows that belonged to Shu, Jiro, and Kluke respectively. Additionally, the PC also gains the Robot (based on the War Mecha Robo from the first game), the Hercules (based on a Hercules Beetle), and the Devil Shadows later in the game, all of which are new to the series and could effectively be considered the PC's original Shadows. 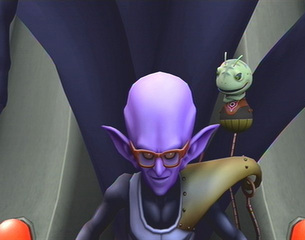 An Ancient hellbent on giving the people of the world grief. Suffers from some vague disease that he spends the first part of the first game searching for a cure for. Is always seen with his companion, Deathroy, at his side. 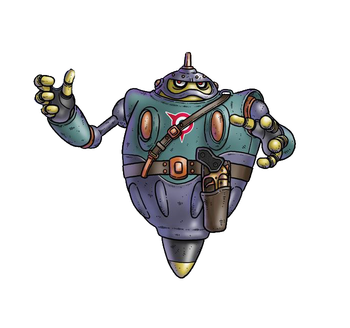 Bouquet
Listed with the Heroes above.
Fushira 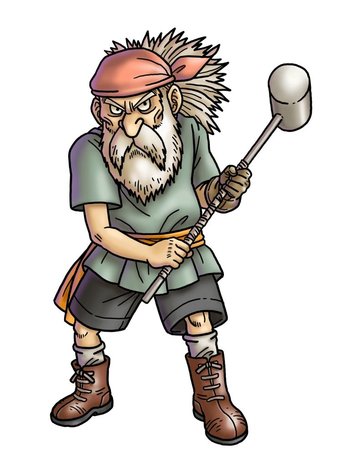 Shu's grandfather and resident blacksmith of Talta Village. Took in Shu after his parents died and raised him as his own. His Shadow is the Rafflesia.

Former chief of Alumaru Village, home of the giant Gorgo Tribe. Was banished to Exile Forest for stealing the Gem of Jibral, which was meant to be a peace offering to promote good relations between the Gorgo and the Jibral Kingdom. Loves Sura-Sura, who still waits for him to return to the village.

A Servant Mecha Robo that lives in Baroy Town. Extremely devoted to their Master, to the point that any discrepancy in the behavior of the other Servant Robos causes him to view them with suspicion. Shu names him Hinetto, but he adamantly refuses to accept such a name.

Current chief of Alumaru Village. He took over after Guru-Guru was banished, but its rumored around town that he gain his position under "mysterious circumstances". Despite this, the people of the village don't seem to mind him, although Jibral seems to have a problem with the Gorgo in a specific section of the Castle Town during Jeelal's reign. 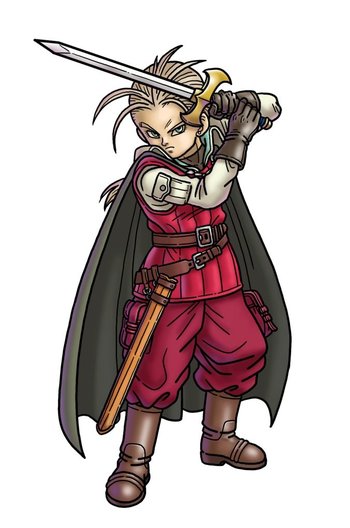 Ruler of Jibral Castle and its kingdom. Despite being relatively young, his bravery, leadership, and compassion has earned him the respect of the kingdom's citizens. Shu and company first meet him when Zola, he, and his army help them defend the Talta Village caravan from some Steel-Eating Tigers. Afterwards, he enlists Shu and the others to help stop Nene's Tsunami Vortex from destroying the city. His Shadow is the Kirin.

In the anime, Shu and company have to gain an audience to meet him. 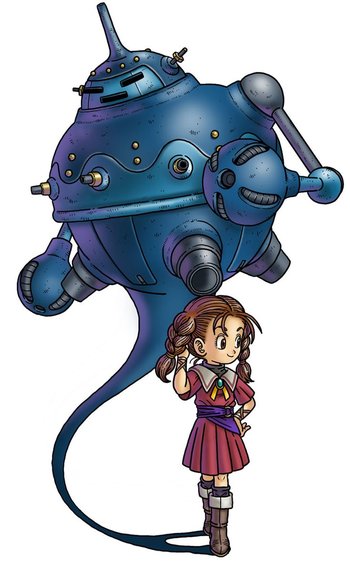 A young girl that lives in Devour Village. She suffered great despair when her parents sacrificed themselves to the Eat-Yeet tree in the village in order to save her life. After Shu and company defeat the tree, she falls in love with him. Her Shadow is the Cat Genie.

A female Gorgo that lives in Alumaru Village. She's deeply in love with Guru-Guru and wishes for him to return to the village. She rings the village's bell to remind Guru-Guru that she will never forget him.

Jeelala makes multiple attempts to persuade her to live with him after her and Guru-Guru's house had burned down, but she adamantly refuses. She lives with her friend in one of the village houses.

Toripo
A traveler scholar looking into the mystery of the Aurora Ruins in the first game. In Awakened Shadow, he's in the Mechanical Cube looking for a rare treasure that he had heard was hidden deep within the Cube. His Shadow is the Tarantula.

In the first game he sells stat and class enhancers for Medals, uncommon items that can be found throughout the game.

A Servant Mecha Robo that Shu and company met in Baroy Town. He helps them escape the Laser Fields when the Mecha Moons started firing at the fields in a frenzy, pelting it with destructive lasers.

Like all Servant Robos, he is dedicated to the Master, and is also designated by a number. However, unlike Hinetto, Yasato happily accepts the name Shu gives him. He's an extremely courteous and friendly robot that ends up helping Shu for much of the game, often commenting that he'd prefer Shu and his party as his new Masters.

Because of his amicable behavior towards Shu and the others, he draws almost all of Hinetto's suspicions to them. His Shadow is the Pegasus.