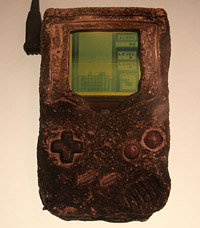 This Game Boy was recovered from a bombed-out barracks during the Persian Gulf War, and is currently on display at Nintendo New York. Why? Because it still runs

.note The screen was replaced for visibility's sake; everything else in the console was exposed to the blast.
Obi-Wan: Terribly convenient how it survived an explosion that big...
R2-D2: It's the primary quest object of the entire campaign. Of course it's going to be indestructible.
GM: Stop metagaming.
R2-D2: Well how else could it possibly have survived?
GM: ...You fly over and grab it.
— Darths & Droids
Advertisement:

This is where a thing, usually the object required for the Big Bad to succeed in his master plan to Take Over the World, cannot be destroyed by conventional means, if at all. Maybe it's made of Unobtainium? A Wizard Did It? Whatever the case, the point is that this object cannot be destroyed easily and may only be able to be destroyed in a specific manner that usually involves rare and obscure means. This can often be used to justify why the heroes are carrying around such a dangerous object instead of destroying it. Sometimes, there will be one thing that can destroy Indestructium: Other Indestructium.

Compare Ragnarök Proofing. See also Made of Iron and Super Toughness, for characters.