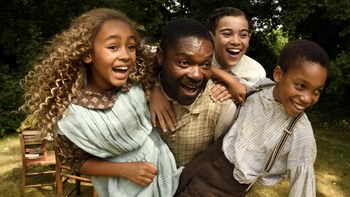 Come Away is a 2020 fantasy-drama film directed by Brenda Chapman (Brave, The Prince of Egypt) in her live-action debut, and starring Angelina Jolie, David Oyelowo and Michael Caine.

Set before the famous tales of how Peter became Pan and Alice went to Wonderland, siblings Peter and Alice try to help their parents (Oyelowo and Jolie) not fall into despair following the tragic death of their older brother, only to then be forced to choose between their darkening home or the world of imagination.

It made its world premiere at the 2020 Sundance Film Festival before being released digitally later that year.

Come Away includes examples of: