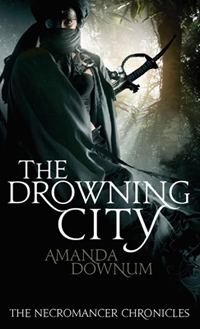 The Drowning City, a 2009 novel by Amanda Downum, is book 1 of The Necromancer Chronicles, though the books are reasonably stand-alone. It's a Low Fantasy novel in an Asian-inspired setting.

Isyllt Iskaldur, a necromancer, arrives in the city of Symir, the Drowning City, on a secret mission to encourage revolt. Symir is the capital of Sivahra, once an independent nation but now conquered and part of the Assari Empire. The ambitious, expansion-minded Empire may be looking to expand further, and Isyllt's home of Selafai is worried. If they can forment enough chaos in Symir, the Assari will be kept too busy to consider further conquest.

The sequel, The Bone Palace, is set three years later but is not set in Symir; only Isyllt crosses over between the two books.

Has no relation to the 2019 Lovecraft-inspired game The Sinking City.