"Still recovering from the loss of Maria Rambeau, Carol Danvers has a new mission: Defending the Mind Stone. Seeking out injustices across the universe that she can right in Maria's name, Carol discovers a new intergalactic threat: The robotic Phalanx, lead by none other than Ultron. Aided by Supergiant, James Rhodes, Talos, Monica Rambeau, and Goose, Carol will fight this threat."
— The story summary attached to the fic
Advertisement: 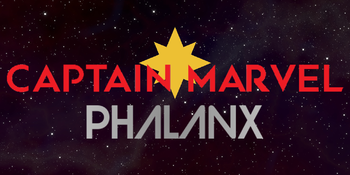 Captain Marvel: Phalanx is a fanfiction by Dragonis Prime first published on Archive of Our Own on June 24, 2019, and is the fourth story in his Marvel Cinematic Fanfiction Universe. It can be found here

. It is the direct sequel to his previous fanfiction, Avengers: Endgame and part of his ongoing Marvel Cinematic Fanfiction Universe.