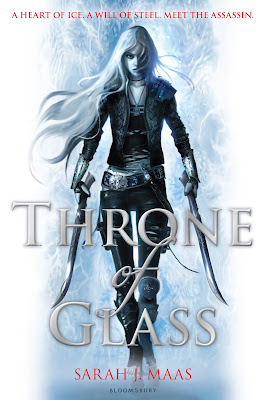 Throne of Glass is a series of young adult fantasy novels by Sarah J. Maas.

Erilea was once a world filled with magic and countless races of magic-bearing beings, humans among them. That all changed when the King of Adarlan launched a campaign for dominance over all of Erilea, banning magic and sentencing all magic-bearing nonhumans to either banishment or death along with the "blasphemous" humans who also wield such power. Now people from nations conquered by Adarlan are shipped to its capitol as slaves in droves. Magic has almost completely vanished, and it seems that Adarlan's royal family shall soon rule the entire realm.

Amidst this chaos, Celaena Sardothien, a master assassin trained by the King of Assassins himself, seemed to be the only one the nobility of Adarlan feared. However, her reign of terror came to an abrupt end when she was captured and sentenced to spend the rest of her life as a slave in Adarlan's salt mines. A year later, Adarlan's crown prince Dorian offers her a path to freedom: If she defeats twenty-three fellow warriors and criminals, she shall become the King's Champion and live the rest of her life in luxury. However, something dark hides within the walls of the Palace of Glass - something evil, which seems to only want to murder the Champions before they have a chance to shine.

The evil shadow soon reveals itself to be a much greater threat than Celaena could've ever anticipated. In the process of figuring out how to defeat it, Celaena will have to confront her harsh past and regain the identity she's been running from for years. With the aid of several allies, both expected and surprising, Celaena may just be able to rid Erilea of this dark evil for good.

In 2019, a two-player co-operative card game called Embers of Memory: A Throne of Glass Game was released. The game is set during the events of Kingdom of Ash.

Has a YMMV page. And now has a tentative character sheet. Please move all character-related tropes there.