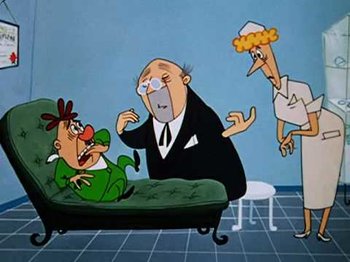 Sh-h-h-h-h-h is a 1955 animated short produced by the Walter Lantz cartoon studio and distributed by Universal. It was the last of Tex Avery's theatrical shorts, before his emotional breakdown due to his dealing with depression.

The short deals with a man called Mr. Twiddle, who because of his work as a drum beater in a music band, has been suffering a severe case of "Trombonosis". His doctor recommends him absolute rest and avoid noise at all costs, otherwise his nerves will shatter and he'll just blow up; so Mr. Twiddle takes a vacation to a remote lodge in the Swiss Alps hoping to get the rest he needs. But unfortunately on his first night, his rest is interrupted by some very noisy room neighbors who loudly play a trombone while laughing uncontrollably. Mr. Twiddle then desperately tries to quiet them before his nerves shatter.