Awesome Music / The Legend of Zelda 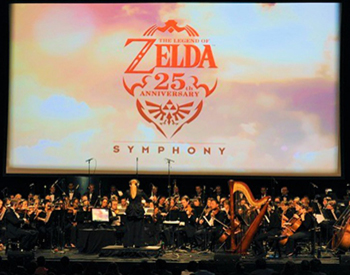 The Legend of Zelda's Awesome Music. You surprised that there's a lot of it here? We aren't. Neither are these guys.

The franchise has spawned some of the most iconic and beloved musical compositions in the entire video game medium. Koji Kondo is the man responsible for the music in this series, and he personally composed most of the best known themes, especially those created in the first entries. However, other composers like Toru Minegishi, Hajime Wakai, Kenta Nagata, Asuka Ota, Mahito Yokota, or Manaka Kataoka, among others, have worked on the series as well, delivering some truly memorable tunes.

Here you have some of them.

The Legend of Zelda Main Theme
The Main Theme of the series, which is usually used as the Overworld music in most games, and eventually also became Link's own theme as well. Even in games where it's not prominently featured, the main riff of the melody usually appears in some fashion. And even if it doesn't, the Overworld theme will always follow a similar style.

One of the most iconic melodies in video game history, with tons of different versions and renditions to boot.

Zelda's Theme
The main heroine also has one of the most beautiful, iconic themes in the franchise associated to her. Just like Link, her theme was bootstrapped to her after its first appearance in A Link to the Past. Now it's one of the most beloved melodies by the fandom, and it's just as prominent in the series as the Main Theme itself. In some games it's even MORE prominent.

One small clarification, although the official title is "Zelda's Theme", it's better known among fans as "Zelda's Lullaby". So don't be surprised if you see that title in some of these linked videos.

Ganon's Theme
The main antagonist also had to have his own theme. Just like Zelda, he got it in A Link to the Past, albeit he's the only one of the main three that didn't get it via bootstrapping. A really haunting piece of music that sends chills to anyone's spine, worthy of a nemesis that threatens Hyrule throughout millennia.
The Legend of Zelda (1986)
Advertisement:
Zelda II: The Adventure of Link
A Link to the Past
Link's Awakening
Ocarina of Time
You don't get a 9 out of 10 from Pitchfork