Literature / Down Among the Sticks and Bones 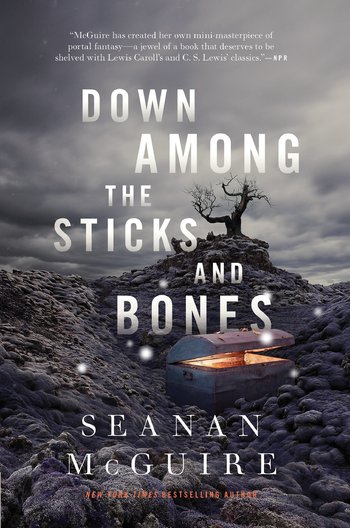 Down Among the Sticks and Bones is a novel by Seanan McGuire. A follow-up to Every Heart a Doorway, it tells the story of twin sisters Jack and Jill and the world they visited before arriving at Eleanor West's boarding school.

Jacqueline and Jillian Wolcott shared a materially comfortable but emotionally stifling childhood, raised by parents who forced them into rigid roles to suit their own fantasies of an ideal nuclear family. Jacqueline is required to be delicate, quiet, and perfectly dressed at all times, while Jillian is pressured to be competitive, high-achieving, and outgoing. At the age of twelve, the two girls discover a set of stairs inside an old trunk in their attic and descend into a strange and dangerous world. Jill becomes the ward of a vampire aristocrat who provides her with a life of luxury and ease in exchange for her blood. Jack becomes the apprentice of the local mad scientist, who requires her to live simply and work hard in exchange for knowledge and the chance to embrace her full potential. When the sisters meet again after years spent pursuing their very different paths, the ensuing clash may lead them to an ending that neither of them wants...