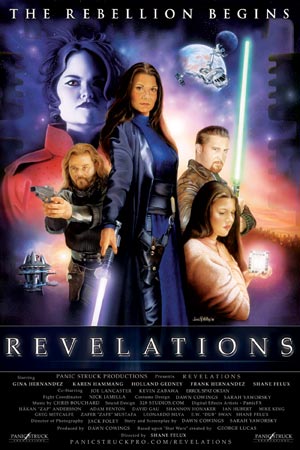 Cade: "She killed every Jedi you brought to her!"
Taryn: "I know."
Advertisement:

Revelations is a Fan Film set in the Star Wars universe, produced by Panic Struck Studios

and directed by Shane Felux.

Set some time after Episode III (but filmed and released prior to it), Revelations follows Taryn Anwar, a former Jedi "Seer" (a Jedi who specializes in visions and prophecies), as she attempts to consolidate any surviving Jedi Knights as well as separate herself from Zhanna, the Emperor's Hand, who was secretly using Taryn to hunt down and kill the Jedi. Taryn, her smuggler friend Declan and reluctant partner Cade are racing against Zhanna and The Empire to recover a long-lost "artifact" which could aid both sides in their respective agendas, with the fate of the Jedi remnant hanging in the balance.

Revelations, as a Fan Film, was much more ambitious than most Star Wars fan films. It runs a full 40 minutes (as opposed to the more common 5-10 minute fan film runtime) and has an actual story rather than an Excuse Plot. It even has some locational shooting (in particular, a rock quarry, a museum and a state park's underground grotto) in addition to the Chroma Key sets more typical of the Star Wars prequels.

The film is free to download and distribute, and can be found right here

This fanfilm provides examples of: