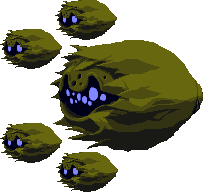 Just so you know: This is what keeps the island floating in the sky.
Advertisement:

Sure it's an adorable game, but it's not so sweet and cuddly beneath the art style...