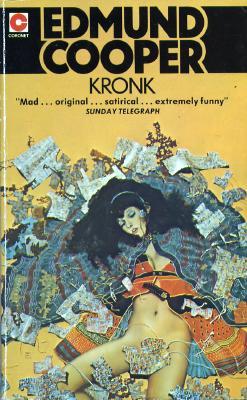 Kronk, originally released as Son of Kronk is a 1970 Dystopia novel by Edmund Cooper. The protagonist, Gabriel Crome, book artist, is sharing a bottle of vodka with a raven and contemplating suicide when he has the opportunity to save the life of Camilla Greylaw who has similarly arrived to commit suicide. After convincing her to give life a chance, he learns that her scientist husband has infected her with a virus named P939 which is a sexually-transmitted disease that removes all aggression from those it infects. They eventually decide that it is their destiny to spread this disease among the world and thereby bring about world peace.

Between the government trying to reclaim their lost research, a pair of identical twin double agents named the Karamazov Brothers, roaming gangs of scholars, the media, and a growing desire to never leave the house, they soon discover that their quest will not be nearly so simple.

Has nothing to do with Yzma's lackey from The Emperor's New Groove.