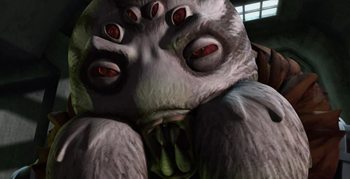 On the planet Christophsis, a relief effort by Republic senator Bail Organa has been trapped by a Separatist blockade. A task force led by Anakin Skywalker attempting to rescue the Senator's forces has been halted by the spider-like Admiral Trench. Anakin is about to order a suicidal charge past the Separatist line when another Venator-class Star Destroyer commanded by Obi-Wan Kenobi arrives from hyperspace. Noting that Anakin disobeyed his order not to engage the enemy until he returned, Obi-Wan calls on Anakin to pull back, as he has a new weapon to use.

Anakin takes a shuttle to Obi-Wan's ship and is shown a IPV-2C Stealth Corvette, which is a prototype stealth ship. Obi-Wan wants Anakin to use the stealth ship to slip past the blockade and deliver badly-needed supplies to Senator Organa. As Anakin prepares to move out, Admiral Yularen recognizes the signature symbol and tactics of Admiral Trench, whom he thought killed in the Battle of Malastare Narrows years before the Clone Wars. He contacts Anakin and warns him about who he's up against, volunteering to accompany Anakin on the mission and advise him.

As the mission gets underway, rookie clone trooper CT-1284, nicknamed Spark, also boards. The stealth ship launches and cloaks to clip past the Separatist fleet. The stealth ship's cloak works perfectly, allowing the ship to pass within spitting distance of a frigate undetected.

Back on the Separatist flagship, Trench and his tactical droid are assessing the situation. Trench decides to pressure the Republic by bombing Organa's position in order to draw the Republic fleet out. Unfortunately, the bombers are about to fly right through Anakin's airspace. Unable to attack without dropping their cloak, Anakin tensely chooses not to engage as the droid bombers fly past without incident. As they strike, Organa desperately calls Obi-Wan for help. Yularen and Anakin advise against Obi-Wan attacking, and Anakin decides to try for a decapitation strike on Trench himself.

Trench begins to suspect something when Obi-Wan fails to rise to the bait. Anakin decloaks and fires torpedoes at Trench's bridge, but they impact harmlessly on his shields. Trench fires back with his own missiles, but Anakin fires flares and recloaks, changing his vector under cover of invisibility. In response, Trench fills the area with turbolaser fire, to no effect. Trench realizes that a Jedi must be piloting the ship.

Admiral Trench sends out a message on all open channels, commending Anakin's bravery in challenging him, but cautions that he has faced and beaten ships armed with cloaking devices before in addition to saying that his attack has failed and Christophsis will fall to the Confederacy. Trench recognizes that the Jedi in command of the cloaking ship is more likely to attack him again rather than try to slip past the blockade.

On board the stealth ship, Anakin, Yularen, and Obi-Wan confer that Trench has fought cloaked vessels before and use tracking torpedoes to hit them. Obi-Wan and Anakin note that most ships with cloaking devices are much larger than Anakin's little ship. Anakin figures that Trench is homing in on the ships' magnetic signatures.

Anakin decloaks and fires on Trench again. Trench orders to lock on and fire the tracking torpedoes, but has to lower his shields first. The torpedoes lock on, but Anakin diverts all power to the ship's engines and heads straight for Trench's command ship, leading the missiles straight back to him. With his shields unable to recharge in time, Trench resigns himself as his ship is once again blown up.

With Trench's flagship destroyed, Obi-Wan and Commander Cody launch a new attack on the leaderless Separatist fleet, while Anakin and Yularen pilot the stealth ship down to Christophsis to deliver the vital supplies to Organa and his men. Senator Organa gives his gratitude to Skywalker, and Yularen expresses both concern and admiration for Skywalker's daring, if unorthodox, tactics.