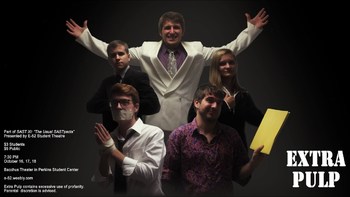 "Nobody fucks with Big Jimmy!"
Advertisement:

Extra Pulp is an American one act play written by John Lewis Young. The plot follows Tim and Roth, the right hand guys of Big Jimmy, the "Big Fuckin' Boss" in town. Above Big Jimmy is the enigmatic criminal mastermind, the Head Honcho. Aside from his many other crimes and schemes, Big Jimmy has Tim and Roth carry out assassinations for the Head Honcho. They receive a manilla envelope and must kill whoever's name is inside. Everything is going well and Big Jimmy seems to be poised to become the next big thing in crime, but when Tim and Roth botch a job and receive a new envelope, their whole operation is threatened.

The play first premiered as part of a one act play festival at the University of Delaware. A video of that production's closing night can be found here