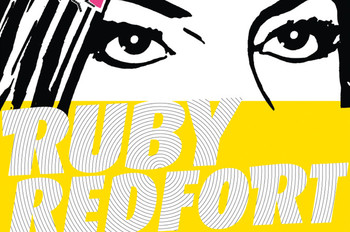 Look into her eyes.
You can never be completely sure what might happen next.
—Ruby's Rule 1
Advertisement:

Ruby Redfort is a book series written by Lauren Child (of Charlie and Lola fame), and follows the adventures of Teen Superspy Action Girl Ruby Redfort.

The daughter of socialites Brant and Sabina Redfort, expert codebreaker and Teen Genius Ruby is recruited by secret agency Spectrum into helping solve codes for a case that resulted in the death of the previous codebreaker. The case turns out to be much more complicated than that, and Ruby, breaking more than a few Spectrum rules and becoming a part field agent, investigates.

The idea for the novels originates from Child's book series Clarice Bean. In it, Clarice is obsessed with a Book Within a Book Ruby Redfort, about a smart girl spy. According to Child, she got so many letters from fans asking for more about Ruby, she wrote some.

A supplementary handbook of sorts, Hang in There Bozo: The Ruby Redfort Emergency Survival Guide for Some Tricky Predicaments, is also available.