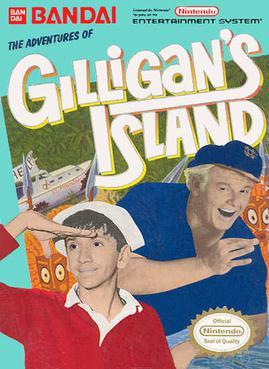 The Box Art
The Adventures of Gilligan's Island is a 1990 Action-Adventure game for NES, made by Bandai and based on the television series of the same name.
Advertisement:

You play as Skipper, and have to lead Gilligan to certain areas. In each level, the Howells, the Professor, and Mary Ann each give out clues and missions, including a blue club for boss fights. There are also items such as bananas to restore the player's energy, rope to teleport Gilligan back to Skipper, and hourglasses to increase the time.