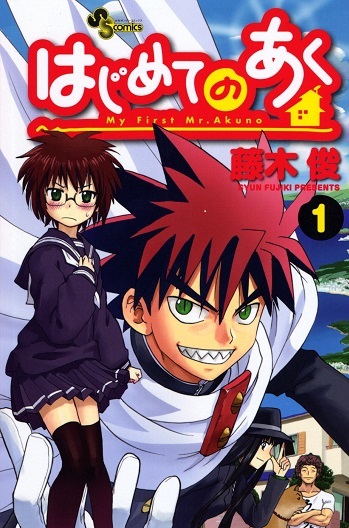 In the spring of Kyoko's first year in high school Eiko, a girl like a sister to her and her cousin, returns with her younger brother, Jiro. The return isn't that big of a deal, but Jiro (self proclaimed super mad scientist) has it in his head that he wants to operate on Kyoko! And, what's even more, the two of them are actually high ranking members of an Evil organization at the run from the heroes of justice...kinda.

This is a Slice of Life action comedy written by Shun Fujiki that mostly follows the actions of Jiro who is in the company of civilians for the first time in his life. Kyoko more or less finds herself holding his leash and falling in love with him, not that she would admit it.

Tropes in Hajimete No Aku