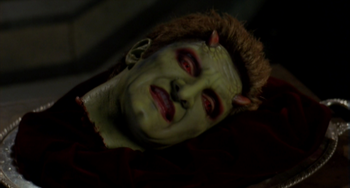 Cordelia cries over the loss of Lorne, only to find out that he is alive: Pyleans can survive decapitation if the rest of the body remains intact. Silas, pleased to hear that Cordelia is upset, tells the captain of the guards to go after the humans and to kill the "bloodsucker" Angel. After talking with one of the servants about these other cows running free, Silas blows up his head with a handheld device. He has a similar but larger machine that can take care of all the cows. Wesley and Gunn wait to have their heads chopped off by the rebels. Before it can happen, however, guards attack the camp. After the battle, Gunn and Wesley convince the rebels that they are not enemies. Freed, they discuss their plans to find Angel and get home. Wesley offers suggestions for attacking the castle and unintentionally becomes their leader, replacing the original leader who died in the attack.

Angel wakes to a pseudo-oatmeal breakfast made by Fred at her cave. Angel and Fred discuss the words she's written on the walls of the caves, and Angel, who recognizes the words, suspects she's unknowingly been opening the portals in Pylea, which is how the Drokken got to Earth in the first place. Suddenly, they are attacked by castle guards, and Angel is able to fight off his demon change until Fred knocks the guard captain out with a rock and then drops his men in the Drokken gully. Fred takes care of Angel's wounds while the captain sits in the corner, tied up. The captain tells of plans to kill Cordelia after she mates with the Groosalugg, also mentioning that Lorne is already dead. He eventually frees himself, attacking the two, but Angel kills him. Angel goes to find his friends, and Fred goes with him to lead the way.

At the castle, Cordelia summons a servant to show her to the mutilation chamber, where Lorne's body is, but the servant cannot, as Cordelia's presence will bring shame to Pylea. Instead, Cordelia requests the girl's clothes. Disguised as a servant, Cordelia makes her way into the mutilation chamber and finds body parts strewn about wearing Lorne's clothes. Groosalugg shows up and says he hid Lorne's body and put the clothes on another body to fool the guards; Lorne's body is waiting with his family to be reattached. Groosalugg reveals to Cordelia that their mating will transfer her visions to him from her, but Cordelia doesn't want to give them up.

Angel and Fred arrive at the rebel camp, offering their assistance to the efforts. Wesley encourages Angel to take the lead in the fight, but he declines. He is ashamed of how he treated Gunn while a demon, and he doesn't think he can do it again. As Angel is about to break the news about Lorne, Landok arrives with his head in a large basket, explaining that he was bringing it home to the body. Angel, Wesley, and Gunn give a brief and lackluster commiseration of Lorne's apparent death, causing him to express his disappointment at their "attempt" to mourn; this outburst frightens the trio. Later, as the group is about to head out, Wesley tells Angel he must challenge and kill the Groosalugg. Angel again expresses the lack of trust he has in himself to stay human, and also explains that the reason he fired the gang months ago was because he felt the darkness rising in him and he didn't want them to witness it. The demon he changes into is the darkness personified and he's afraid that he will eventually be unable to return to his human form. Wesley has confidence that he can; he's strong enough to do whatever is necessary. Aside, Gunn wonders whether Angel is capable, and Wesley admits that he's not sure he is. In the mutilation chamber, Cordelia has a vision of the green monster (which she does not know is really Angel) killing the Groosalugg, much to her distress, as she has come to love "Groo". Everyone disperses from the camp to prepare for the attack. Angel plants a torch in the ground and calls out to the Groosalugg for battle. Silas, who had been demanding that Cordelia get on with the "com-shuk", drags the Groosalugg outside to face Angel, lying to him about what horrors Angel will visit upon Cordelia if he wins, in order to make him angry. Led by Wesley and Gunn, the rebels attack the palace. Silas goes to activate the device that will blow up the heads of all of the "cows" wearing collars, but Cordelia decapitates him just before he triggers the device. Against his wishes, Angel transforms into the beast as he is losing the battle against the Groosalugg. However, after he gains the advantage, he transforms back to human, and Cordelia stops the fight completely by confessing her love to Groo.

The next day, Lorne, his head reattached, says goodbye to his family. His mother, even more ashamed of him than before, yells at "the runt of her loins" as Angel rushes him out. Outside, Lorne admits he's glad he came back. His return has allowed him to confirm that he doesn't belong in Pylea but in LA, where no one really belongs. As he and Angel return to the village, Lorne breaks into song, causing nearby Pyleans agony at the noise. Cordelia's last act as princess is to make a new law abolishing slavery, after which she appoints Groosalugg the ruler of Pylea. With the help of the priests' books everyone, including Fred, returns to LA, where they drive Angel's car right into Caritas.

The team that returns to the hotel is a far happier one than before they left. As Cordelia explains to Fred that tacos and soap still exist, and Gunn enthuses about the fun portal ride, Angel asks to be the one to say a classic line and opens the doors with the words, "There's no place like... Willow?"

In the lobby, Willow Rosenberg is waiting and everyone's good mood immediately dissipates as the look on her face makes it clear that something terrible has happened. Angel already knows: "It's Buffy."