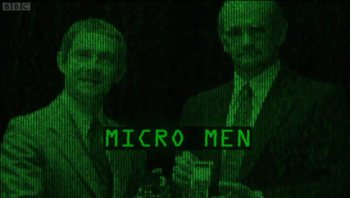 Chris Curry, an employee of Clive Sinclair's Sinclair Radionics, is given (fairly) free rein to run a formerly disused company while his boss is mired in governmental control of his main business. While doing this, Curry hits upon the idea of a small device, called a "computer", that they can sell as a kit to hobbyists. Sinclair ruthlessly shoots the idea down. In frustration, Curry leaves to found his own company, Acorn Computers.
Advertisement:

Meanwhile, Sinclair has been reading up on these "computers". He discovers that most of the ones on the market, from big American companies like Apple and Commodore, are so expensive you could quite literally buy a car for the same price. He realises, if he can make a computer cheap enough, everyone will want one, even if they have no idea what to actually do with it.

The BBC has also heard of these "computer" contraptions, and is interested on doing a computer literacy project, based around a television show. They want a computer to base this show around. Of course there can be only one successful bid, and whichever machine gets the BBC logo stamped on it will have a huge competitive edge in the market place...

Thus begins the struggle for the early Eighties computer market, and a personal battle between two geniuses. Curry, who still feels slighted by Sinclair, wants to build the best computer he possibly can and show his former mentor what he can really do. Sinclair, believing himself betrayed by Curry, wants to teach him a lesson and show him how it's really done.

Micro Men is a rather fictionalized, but nonetheless entertaining, comedy-drama about the battle for the British computer market and the men behind it.