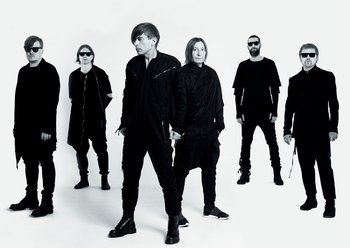 Bi-2 (russ. Би-2, pronounced "Bee-dva") are a Russian Alternative Rock band and considered one of the most successful, longest playing and influential rock bands within Russia. Combined, they have won about two dozen awards for best rock band, best vocalist and best rock song in Russia, as well as one World Music Award as Best Selling Russian Group in 2001.

It was originally founded under the name of "Братья по оружию"/"Bratya po Oruzhiyu" (Brothers in Arms) in 1988 by a group of people which included Alexandr "Shura" Uman and Yegor "Lyova" Bortnik, who had met as teenagers in a theater group in 1985 in Minsk, Belarus. Soon the band was renamed "Берег истины"/"Bereg Istiny" (Shore of Truth) and it had moderate success within Belarus with a varying line-up of around fifteen members and stage shows which skirted Absurdism. Though Lyova had been writing the band's lyrics all along, he only became its lead vocalist in 1989 when the band renamed itself again, this time to "Bi-2" ("Берег истины 2"/"Bereg Istiny 2", Shore of Truth 2), and recorded its first album.

In 1991, Lyova and Shura then immigrated to Israel, where they continued to perform as Bi-2 and also enjoyed some succes before they disbanded and went their separate ways, Shura immigrating again and playing in the darkwave band Chiron in Melbourne, Australia and Lyova serving in the Israel Defense Forces. Through all this time, they both kept writing music for their common band and exchanging it via phone and internet.

When Lyova joined Shura in Melbourne in 1998, they decided to officially revive Bi-2 and recorded another album, which they tried to market in Russia, again with only moderate success. They both left Australia for Russia and in a last bid to be noticed pooled their money and threw a giant BBQ party at an acquaintance's dacha (holiday house), inviting all and every journalist whose contact information they could get their hands on. This landed them a gig at the first "Nashestviye" festival — which would go on to become Russia's biggest rock festival — but also a TV appearance and brought their songs onto a couple radio stations. It also lead to Bi-2 contributing to the soundtrack of the popular Russian film Brother 2 with their song "Полковнику никто не пишет" ("Polkovniku nikto ne pishet"; engl. "Nobody writes to the Colonel"), which along with "Варвара" ("Varvara") and "Никто не придёт" ("Nikto ne pridyet"; engl. "Nobody will come"), became a hit and launched the band's career.

Initially playing with varying musicians with Lyova and Shura as the joint Face of the Band, Bi-2's line-up eventually solidified to:

Bi-2's music is characterised by unusually westernised sounds but also by lyrics which fall squarely into the genre of Russian rock by employing both obscure and less so literature and popculture references, dealing with nostalgic and darkly abstract themes and striving to capture a moment's feeling rather than telling a coherent story. Lyova encourages listeners to interpret the band's lyrics in whichever way they feel it relates to them and their own lives, and while the band's music and lyrics evolve as its members change and focus on different topics it is highly unusual to find a song which can be pinned down to reference a particular event.

Beside releasing their tenth studio album titled Горизонт событий (Horizont Sobytiy; engl. Event Horizon) in 2017, the band has released five albums each titled Нечётный воин (Nechyotny Voin; engl. Odd Warrior) which consist exclusively of duets and collaborations with other bands or musicians, including Diana Arbenina, Latvian band Brainstorm, Agata Kristi and John Grant. Furthermore, Bi-2 have released two albums collaborating with the Prague Metropolitan Symphonic Orchestra, which feature their songs rewritten to be performed by an orchestra, as well as provided a number of soundstracks for various Russian movies.