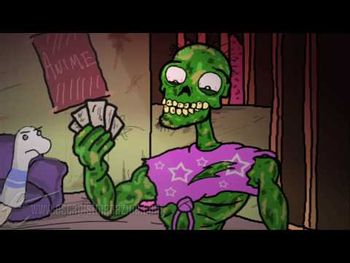 Actually not a terrible place to live, once you get to know the neighbors.
The sun came up and the bombs came down, nuclear fallout in a southern town, Apocalypse Lane you still look alright to me.
Advertisement:

Apocalypse Lane is an animated web series created by Jon Etheridge and Bryan Mahoney for The Escapist. It details the lives of a number of "people" who have survived the Apocalypse, all living in one cul-de-sac. It starts out fairly episodic, but develops a plot later on. It used to update every Thursday at noon, and episodes range from about 4.5 to 8 minutes in length. Episodes can be found here

The cast of characters includes:

"You know, normally I hate all of you guys, but when I'm taking your stuff... well, I feel like there's a bond."
Willy: Well, that was an uneventful trip.
Father Hicky: Four, three, two, one...
(Frank, Pumper, and Twitchy burst in)