Web Video / My Little Pony in a Nutshell 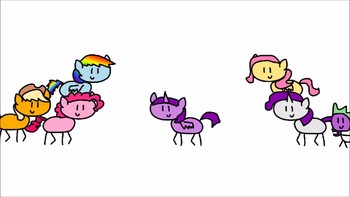 The Mane Six (and Spike) in nutshell form.
"What the hay?"
— Multiple characters
Advertisement:

My Little Pony in a Nutshell is a recap/parody series for My Little Pony: Friendship Is Magic by YouTuber Round Trip and can be found here

. It started with My Little Pony: The Movie (2017) and has continued with Seasons 8 and 9 of the series. The characters are represented by stick figures, while the voices are all done by a text-to-speech computer program, with only a few exceptions.List The cutie map in "The Parent Map", the Tree of Harmony in "The Mean 6" and "What Lies Beneath", parts of Rockhoof's dialogue in "A Rockhoof and a Hard Place", Garble's poetry in "Sweet and Smoky", and the Dazzlings in Rainbow Rocks. Each video is about 2 minutes long, except for the movie (5:19), "What Lies Beneath" (4:07), "School Raze" (4:32), "The Beginning of the End" (3:19) and "Student Counsel" (3:58).

He also made the fan-song "Alternate Realities" with an accompanying music video in the same style.