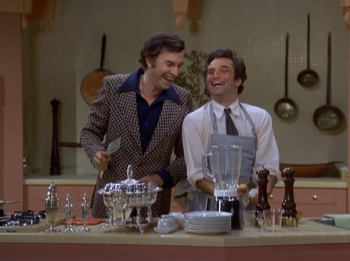 "Double Shock" is the eighth and last episode of the second season of Columbo.

Clifford Paris (Paul Stewart) is a wealthy man with a large fortune. He is about to get married to sexy Lisa Chambers (Julie Newmar), who, as disapproving housekeeper Mrs. Peck (Jeanette Nolan) sniffs, is young enough to be his granddaughter. Television chef Dexter Paris (Martin Landau), Clifford's nephew and heir to half his fortune, seems to be OK with this, but in reality he isn't. After leaving the Paris mansion, Dexter sneaks back in and murders his uncle by chucking a turned-on mixer into his uncle's bath, electrocuting him. Dexter then stages his uncle on an exercise machine to make it look like Clifford had a heart attack.

Or maybe it wasn't Dexter. Because, as investigating detective Lt. Columbo is surprised to find out, Dexter has an identical twin, Norman Paris (also played by Landau), a banker and heir to the other half of Clifford's fortune, and who has racked up significant gambling debts, and who also didn't approve of Clifford's engagement to Lisa. Columbo soon figures out that Clifford was murdered—a wet towel and slick bar of soap in the bathroom indicate that he took a bath—but figuring out which nephew did it is more challenging.

A young Dabney Coleman plays Detective Murray, the first officer on the scene.