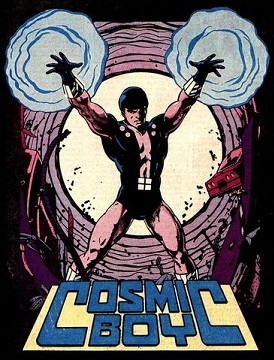 In most incarnations, the leader of the Legion. Cosmic Boy's serious demeanor and respect for authority lends him to the role of leadership, but places him at odds with Lightning Lad. Preboot, his brother was Pol Krinn, aka Magnetic Lad (no relation to a minor Legion villain of the same name). His personality, like his power, is magnetic—he draws people to his cause with his charisma.

In the FYL continuity, Cosmic Boy was De Powered during a war between Braal and Imsk. He married Night Girl and had a son named Pol after his late brother. Shortly before his reality was destroyed by Zero Hour!, he regained his powers thanks to a pair of power gauntlets and took the name Polestar.

Postboot, Cosmic Boy was a sports star whose talent helped him as a superhero. When half the team was stranded in the present day, Cos led them through Final Night and Genesis and was instrumental in getting them home. When the Postboot Legion's Earth was destroyed in Infinite Crisis, he continued to lead them, and in their current exile as the Wanderers, he is leading them in their search for a new home.

In Threeboot, though Cosmic Boy founded the Legion, he was widely disliked because he was forced to accept supervision from the United Planets. He struggled with command, and after the Dominator War, ceded leadership to Supergirl. He was approached by a group of superheroes from the 41st century whose legacy he inspired and joined them in the future.

A telepath from one of Saturn's moons, Saturn Girl is the glue that holds the Legion together, keeping a balance between the cool-headed Cosmic Boy and Hot-Blooded Lightning Lad. When Cos isn't the Legion's leader, it's usually her. In all incarnations of the Legion, the love of her life is Lightning Lad.

In Threeboot, Saturn Girl's people were so reliant on telepathy that their vocal cords were useless. She was distant and reserved. Her mother was a member of the United Planets council, which put her at odds with the more iconoclastic Legionnaires. 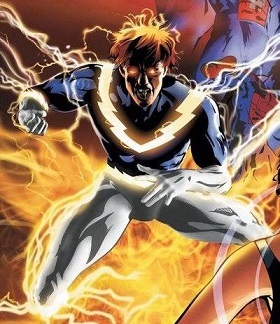 An inhabitant of the planet Wynath, Garth Ranzz, his twin sister Ayla, and his older brother, Mekt, were attacked by lightning beasts after crashlanding on a distant planet. The bolts reacted with the siblings' body chemistry, granting them the power to absorb, store, and discharge electricity. When Mekt went missing, Garth set out to find him, meeting Cosmic Boy and Saturn Girl, and founding the Legion in the process.