Web Animation / Not Another Sprite Fight 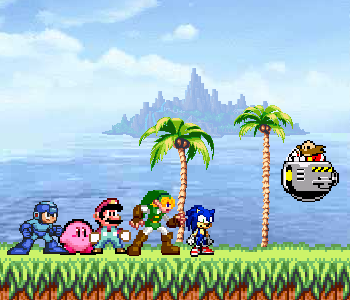 Not Another Sprite Fight

(Or his alias at the time of development, Short Factor) in 2007. As the title suggests, it is a sprite animation about sprites fighting.

Oh please, not another sprite fight...

The premise of NASF is simple. It is a crossover battle of various video game icons. Before NASF, the idea was strong and of interest, but hadn't been explored with much depth or seriousness. Some sprite animations existed that were crossovers, but were usually very specific to a couple series and intimately tied to a storyline, such as Sonic's Quest for Power, a crossover of Sonic and Mega Man X. NASF however has no real storyline or plot motives, and combines several significant series and their titular characters in a more purely fighting oriented action animation. It is an exercise in how these characters and their unique abilities would fare against each other, playing with, re-imagining and expanding on existing concepts, such as showing Link's power over time and Kirby's copy ability in more descriptive visuals and events. NASF is widely received positively, even by many who are generally opposed to sprite animations.

While the animation is not spectacular (In fact, the creator has stated on multiple occasions that he despises it) it has gained popularity almost comparable with Super Mario Bros. Z (In fact, Lange has actually taught Alvin some of what he knows)

A sequel is being planned, however Mr Lange is trying to make it as good as he possibly can and currently has not actually started animating the latest version yet (He has made quite a few attempts but scrapped each one). However, a lot of content is being developed in advance before the actual animation process can begin.

A remake, named NASF DX, has also been announced which will not only feature improved animation, sound and graphics, but will essentially exist as reboot with it's own pseudo story which will tie directly into NASF 2 and have it's own unique island in the vein of the Sonic the Hedgehog games. Currently, there are no details on its development or release date. However, a kind of proof of concept can be seen in Lange's Helix Theory Video.

An enhanced quality version of the original with a deleted scene featuring Samus has been uploaded to YouTube, with the title Not Another Sprite Fight - Special Edition.

Furthermore, a stinger-like animation was made by Lange as a birthday present for Destruction Series

, which you can check out here.