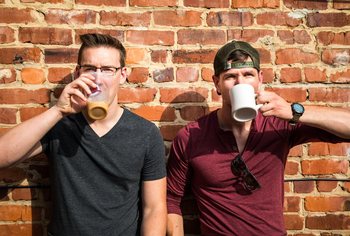 is a web video series starring Ben and Jay Carlin, where in they mainly discuss topics related to Harry Potter, Pixar, Disney, and Star Wars.

Ben and Jonathan started making videos in 2012 as a project to do together. The two were inspired by the VlogBrothers to hold a one year conversation via video blogs, holding to pretty much the same rules (uploads every weekday, alternating between Ben and Jonathan, punishments for failure to upload, etc). This format in and of itself ran for one year, Monday thru Friday from June 2012 to June 2013. The two continue to upload videos, with Jonathan uploading on Tuesdays and Ben on Thursday, with a spinoff gaming channel also being made in the process. They began to focus more on the Harry Potter, Pixar, Disney, and Star Wars videos when they realized that they both enjoyed making such videos and said videos being a hit. In addition, the brothers have also started some charity work since the completion of the original year long project, namely with Big Brothers/Big Sisters.