Characters who have appeared on The Nostalgia Chick's show.

open/close all folders
The Nostalgia Chick 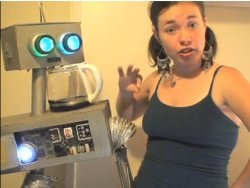 The main star who reviews girly awfulness from our childhoods. Very snarky, owns pigtails that defy gravity and has quite a few issues.
Advertisement:
Nella

After Nella's death at the hands of a ladder, she was cloned and resurrected by a quasi-demonic intergalactic force of evil and the clone became Dark Nella, who Won't Take Lindsay's Shit any longer.

Dr. Tease's proper scientist collegue. Angry at Hollywood for its inaccurate portrayal of science. She was sent into space by Dr. Tease.
Elisa

One of the Chick's friends, pressed into a supporting role in the videos when the video needs someone who isn't Nella, another TGWTG contributor, evil, or particularly cracked. At first, anyhow - over time it became clear that she's just as much a deep well of crazy as the others.

Has her own series, Vampire Reviews

Summoned by Lindsay to give Nella a makeover in her review of Grease, but failed. Ever since then, she appears to Team NChick whenever they mention her name or talk about fashion. She's also a part of N. Chick Labs, teaching members of the team the importance of pink.

Maven of the Eventide

Injector of all things to move the plot. Wears a propeller beanie. Carries a turkey baster. Killed Nella. Dark Nella returns the favor. Mayonnaise returned him to life.

Abusive husband and frequent rapist. Fond of roofies. And rapping.

A hooded non-actor more interested in books than his surroundings.

The woman responsible for the Wii Fit. Still hanging from her pull-up bar after the last Hercules Drinking Game.

Random Goth Chick, plucked off the street because you need goths to do magic. Halfway between Edgar Allan Poe....and the grave.

Not a current part of the team, but a character from an invoked Old Shame documentary Lindsay did when she was young.

Who is he again? The Chick's ex-boyfriend from school who is now her roommate. Awkward.