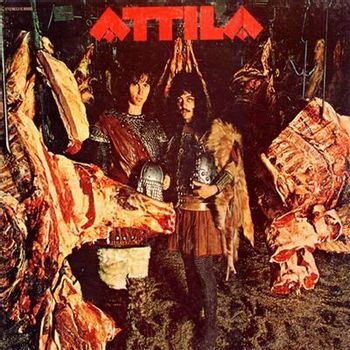 After Billy Joel set his first steps as a Rock & Roll band called The Hassles he and band member Jonathan Small started a Progressive Rock and Psychedelic Rock band called Attila, built around Historical Domain Character Attila the Hun and also dressed up to it. Musically they were notable for not using any guitars, but instead relying on just drums (Jonathan Small) and a heavily distorted B-3 organ (Billy Joel). They released a Self-Titled Album in 1970, full of Large Ham moments.

The band split up soon afterwards, also because Joel began an affair with Small's wife, Elizabeth, with whom he eventually married. Attila remains an Old Shame for both musicians involved. Small became a film producer and Joel eventually found success as a solo musician.

Please don't confuse this band with the Deathcore band of the same name.